When Alec Mapa was presented with the Outfest Fusion Achievement Award in Los Angeles on Saturday night, the man known for making audiences laugh on shows like Ugly Betty and Half & Half couldn’t help but get a little serious.

Mapa received the award at the Egyptian Theatre before the screening of the film Alec Mapa: Baby Daddy, a documentary build around his stage show of the same name which tells the story of raising his adopted son, Zion, with husband Jamie Hebert who produced the film.

‘Most of all, I would like to thank my son Zion,’ Mapa said as he concluded his acceptance speech, ‘because he’s given me the best possible story to tell.’ 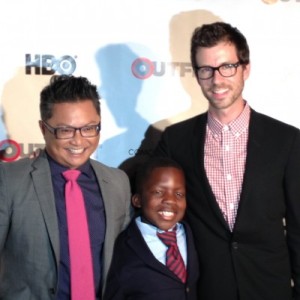