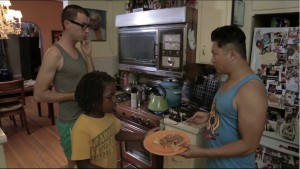 Since proving his dramatic acting chops in Broadway’s  M.Butterfly, entertainer Alec Mapa has mostly kept audiences in stitches with his comic work in television series such as Desperate Housewives and Ugly Betty and his hilarious one-man shows. The versatile performer will display all facets of his personality with the Outfest Fusion world premiere of Alec Mapa: Baby Daddy on March 15, the same night Mapa will receive the prestigious 2014 Fusion Achievement Award. Directed by Andrea James, the documentary incorporates Mapa’s signature stand-up comedy into a behind-the-scenes look at how his life has changed since he and hubby Jamison Hebert adopted their son Zion. Mapa chatted with Queerty about his new movie, what the award means to him and how the entertainment industry has changed for people of color.