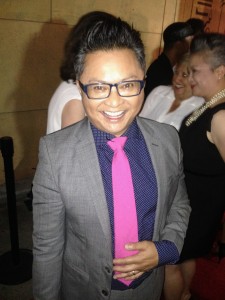 At the gorgeous art deco Egyptian Theater in the heart of Hollywood, a cavalcade of celebrities showed for the premiere of  Alec Mapa‘s documentary Baby Daddy. The show is based on his shelarious one man show centered around the adoption of his son Zion. Walking the red carpet were gAy-listers (below) Jake Shears, Bruce Vilanch, Reichen Lehmkuhl (with friend), Frank DeCaro, AND JAMES ST. JAMES (OMG!) The show. was. EVERYTHING! Heart warming,  hysterical, thought provoking, and just… WONDERFUL! The takeaway? Alec’s SPOT ON impersonation of Bette Davis singing Party in the USA by Miley Cyrus!
Says Alec of the doc: