I recently had a candid talk with the hilarious Alec Mapa, the gay star of stage and screen, about his forthcoming comedy special Baby Daddy. In it, he discusses everything from gay sex to fatherhood, and it will be debuting March 15 at Outfest Fusion in Los Angeles (and I will be there too!), which you can buy tickets to here. 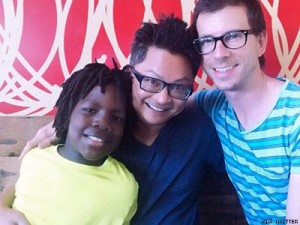 Technically you’re popping my interview cherry for The Advocate, so I’m thrilled it’s starting with you. I’m a total fan.
Mmm, OK! [In a “hey, hunty” kind of tone]

So, you have this new stand-up special called Baby Daddy. What’s the story behind it?
I originally made Baby Daddy just to give myself a damn job! 2012 was a slim year, TV-wise, so I wrote this and traveled the country performing it. Sure enough, it has become super timely, with all of the antigay initiatives popping up and the head of the Catholic League on CNN saying we’re harmful to children and the only purpose to marriage is to start a family. We’re kind of a voice in the wilderness now, saying “We’re not who you say we are.”