Gay Iconography: All About Alec Mapa
By Bobby Hankinson
Towleroad
05/23/2015 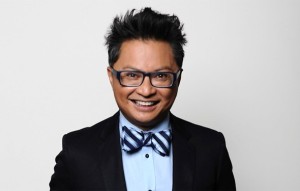 Even if you can’t immediately place his name, you’ve definitely seen actor Alec Mapa pop up in any number of television shows and film roles. The Filipino-American actor has left his mark on series including Roseanne, Seinfeld and Friends. You might know him best from his work onDesperate Housewives and Ugly Betty, but the openly gay actor is also the proud papa of an adopted son, and an outspoken advocate for the LGBT community.

Mapa and his husband Jamie Hebert married in 2008. Together they adopted a five year old boy. Their experience parenting is the source material for much of Mapa’s upcoming Showtime comedy special Baby Daddy, premiering June 12.